Eternity - Where & how & who decides? 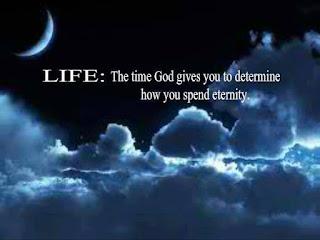 YOU DECIDE WHERE & HOW YOU SPEND ETERNITY: Do you get to Heaven by believing all the right doctrines, important as they are? No. Even Satan knows all the right doctrines. ANSWER: You get to Heaven (the "where") by trusting Jesus to live your life as He empowers you to live your life as He would if He were you, because in trusting Him, He lives in you. "I have been crucified with Christ and I no longer live, but Christ lives in me. The life I now live in the body, I live by faith in the Son of God, who loved me and gave himself for me." Galatians 2:20 Salvation is a free gift; you can't earn it.*

HOW DO WORKS FIT IN, THEN? "How" you spend eternity is determined by selfless works devoid of wrong motives. The Judgment Seat of Christ will have no unbelievers there. Unbelievers go to the Great White Throne Judgment** (where no believers will be). Your works will be set afire, and the resulting remainder will be as gold, silver or wood, hay and stubble. The enduring works will gain you rewards.*** You may be a judge over a territory the size of Gorst or Australia, rewards and responsibilities commensurate with your selfless works partnering with God while you're still on Earth. Let's get busy!

* "For it is by grace you have been saved, through faith—and this is not from yourselves, it is the gift of God—not by works, so that no one can boast." Ephesians 2:8-9

*** "If anyone builds on this foundation using gold, silver, costly stones, wood, hay or straw, their work will be shown for what it is,because the Day will bring it to light. It will be revealed with fire, and the fire will test the quality of each person’s work. If what has been built survives, the builder will receive a reward. If it is burned up, the builder will suffer loss but yet will be saved—even though only as one escaping through the flames." 1 Corinthians 3:112-15