STUNNING: My King's High School miracle: the next "Hoosiers" - Saved for a Reason 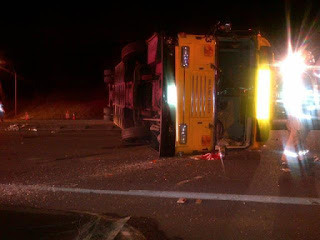 This past weekend we saw a documentary that melted me to tears. The King's basketball coach, who for years was the state-championship stepchild, had won the district championship and riding with the King's team on the bus home in February 2015.

On the off-ramp from I-5, brakes failed and the bus speeded up. The coach heard the bus filled with prayers: for survival, for salvation. The coach instantly knew his life would forever change: death, injury, paralysis.

The crashed and turned over.

Some minor injuries, bruises, and the coach's back pain.

The following school assembly, the whole team, spared from death, talked about a miracle.

They ordered T-shirts: "Saved for a Reason - Loving God; loving others.

The opposing team bought T-shirts with the same message.

A producer came up to the coach: "This is more than basketball, isn't it?"

But it wasn't all about basketball.

It was about changed lives.

Here's the DOCUMENTARY TRAILER
Posted by Dave Harris at 12:02 PM