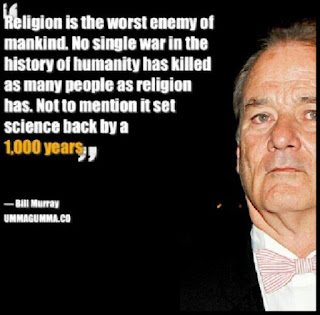 Thinking more about my previous post about what to do if an atheist objects to my praying in public, I think also I would like to lovingly invite this woman to a meal/discussion about what makes one upset about another's point of view. I would ask her if she would welcome a way to enjoy a peaceful resolution and a way to calmly resolve any dissonance in her life. The way I have found best is abiding in Christ moment by moment.

On another point, I always wondered why skeptics seem to get a lot of their information from comedians and movie stars, and boldly affirm their deeply held convictions by electing Jesse Ventura, Al Franken and Marion Barry. What qualifies Bill Murray to claim special knowledge on the other 99-plus percent of all the knowledge in the universe that is undiscovered by him?

Going online, I see lots of arguments on both sides of "who killed most people, religion or atheists?" Stalin, Pol Pot and Hitler killed more people than so-called Christian crusaders (who were responding to Muslim aggression). I find online defenders of atheism who say those evil men didn't kill "in the name of atheism." This is parsing words. In one respect they are right. Stalin didn't kill while hollering, "Atheism is Great!"

But peel the onion and search for what lurks in the hearts of evil men. Do you find killers who devoutly seek to abide in Christ moment by moment?  No. I find in evil men a huge vacuum. No God. Or an idol replacing God.

I am something of a skeptic myself. Friends have encouraged me to challenge sources, even of supposedly Christian origins. Here's an example. While names were changed to protect the innocent to guilty, the principle is valid:

Einstein or someone else?

As for setting science back 1,000 years, I defer to my dear friend, Gus Broffitt, a former skeptic and head scientist at Allison. He found Christ in a dramatic way, studied the creation accounts and found that they didn't conflict with any scientific findings. His brother was head of the mathematics department at Ames (Iowa) College. Gus asked him to run the numbers for the probabilities of over 300 prophecies of Christ coming true, as they have. The brother found the odds were astronomical and, as a result, he also became a believer.  Dr. D. James Kennedy found it quite interesting that most branches of science and mathematics (e.g., Newton and Pascal) were founded by Christians.

My respected Bible teacher, Carl Johnson, pointed me to Hugh Ross and  Reasons to Believe from a scientific perspective.

Ultimately, I like what one atheist said: "I'm not a Christian, but I want to live next door to one." I'm dabbling in a writing project called "Safe Sects." Living next door to a committed Christian is enjoying the safest neighbor. With wars and rumors of wars, I want to stick with someone who abides in Christ...moment by moment.

He has shown you, O mortal, what is good.

And what does the Lord require of you?

To act justly and to love mercy

and to walk humbly with your God.