The mind-blowing, out-of-reach understanding of eternity 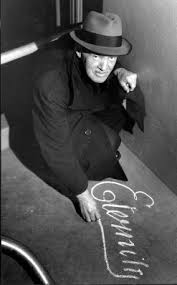 THE INCREDIBLE MR. ETERNITY: Every once in awhile I am aroused gasping from a half-sleep stunning fright awareness of the length of eternity. DO NOT MEDITATE ON ETERNITY. IT WILL DRIVE YOU MAD. (OK, now you will try. STOP IT.)  I give up. Asking someone to stop thinking about eternity is like asking someone to don't think about a pink elephant. No use, and so I will tell you my cure: I resolve this by remembering that I could have been created as a person, or even a tse tse fly, sitting on an ant hill in Ethiopian 4,000 years ago. Because the Ancient of Days put me here...and now...means that He has conquered eternity and allowed me to win the timeless lottery. O my. Breathtaking. So, what, do you ask, does this have to do with Mr. Eternity? Mr. Eternity was one of the greatest evangelists. As my friend, Jack K, would appreciate, he didn't buttonhole people. He simply wrote "Eternity" on sidewalks and restaurants wherever he went. My brother Ivan, from Australia, told me about him. On Y2K, the famous bridge in Sydney, where I visited, emblazoned the word "ETERNITY" across the fiery lights on New Year's Day, Jan. 1, 2000, to honor Mr. Eternity. He was anonymous for years until discovered. Many people then told him they had embraced Jesus because of the word he wrote all over Australia.

Me? My concept was too small. Consider 2 ideas: the ring has no beginning nor ending; and time is a man-made idea. God is not bound by time. Eternity is NOW. There's no tomorrow or yesterday. You live in the NOW.

THIS
and, of course, HERE


http://www.hcna.us/columns/forever_explained.htm
Posted by Dave Harris at 6:56 AM