Alternative to Trump, but vegetarians stand in the way! 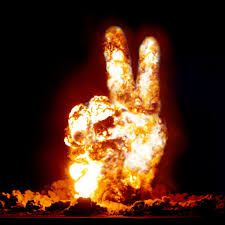 Someone has proposed a brilliant alternative to Trump's proposal to ban all Muslims from entering America. Challenged as to how to determine whether one was a Muslim, Trump said to simply ask. If the person says "yes," then no, that person is refused entry.

Problem: Muslim doctrine encourages a devotee to lie to an infidel. You can read about permitted lying here: LYING: JUST DO IT

Solution: And so the brilliant alternative to asking: require them to eat a bacon sandwich.

Problem: This is discriminatory - to Jews and vegetarians.

Partial solution: As an option, allow them to pray a Jewish prayer.

So, sadly, vegetarians screw up the plan.

I'm mostly vegetarian, because I am diabetic. Oh, and the real reason: you are what you eat; accordingly I don't want to be a chicken, turkey, ham, shrimp or fruitcake. There are, however, those who say I'm nuts.

PROOF: Thursday, someone told Wifey that her husband is quite the wit.

Her humbling response: "You're half right."

So, you see, vegetarians are the reason we cannot prevent Muslims from entering the United States. Sorry about that, Trump.

TOP SECRET (please don't disseminate): We just might offer those wanting entry a bacon sandwich that the CIA, unbeknownst to anyone, has replaced the bacon with a vegetable bacon-imposter.

My own remedy: bacon roulette: Offer the bacon sandwich. Only one out of three is real bacon. That way, vegetarians can take the chance in good conscience, that they were fakin' bacon.

And peace on earth descends upon the land. [end of Harris remarks - source to follow]
------
Why take the Trump stunt seriously?
By Charles Krauthammer The Washington Post

So how exactly does this work, Donald Trump’s plan to keep America safe from Islamic terrorism by barring entry to all Muslims? He explained it Tuesday on TV. The immigration official will ask the foreigner if he’s a Muslim.
“And if they said, ‘yes,’ they would not be allowed in the country?”
Brilliant. And very economical. That is, if you think that bloodthirsty terrorists — “people that believe only in Jihad, and have no sense of reason or respect for human life,” as Trump describes them — will feel honor-bound to tell the truth to an infidel customs officer. They kill wantonly but, like George Washington, cannot tell a lie. On this logic hinges the great Maginot Line with which Trump will protect America from jihad.Trump: “That’s correct.”
I decline to join the chorus denouncing the Trump proposal as offensive and un-American. That’s too obvious. What I can’t get over is its sheer absurdity.
Here’s a suggestion (borrowed from my Fox News colleague Chris Stirewalt) to shore it up. At every immigration station at every airport in America , we will demand that every potential entrant — immigrant, refugee, student or tourist — eat a bacon sandwich. You refuse? Back home you go!
True, the Stirewalt Solution casts the net a bit wide, snaring innocent vegetarians and Orthodox Jews. But hey, as Trump said Tuesday , “We’re at war — get it through your head.” Can’t get squeamish about collateral damage.
Dozens of others have already pointed out how strategically idiotic is Trump’s exclusion principle. Absent a renewed Christian crusade against radical Islam — with those fabulous Hollywood-wardrobe tunics — the war on terror will be won only in alliance with moderate Muslims. Declaring them anathema is not the best beginning to coalition-building.
To take but the most obvious example: Our closest and most effective allies on the ground in the Middle East are the Kurds. Trump would turn them back at the Orlando airport. No Disney World for them. Or does he not know that they are Muslim?

It is embarrassing even to embark on such arguments. To treat “no Muslims allowed” as a serious idea is to give credit to what is little more than a clever stunt by a man who saw Ted Cruz beating him for the first time in the Iowa Monmouth poll and five hours later decided it was time to seize the stage again.
This got the thinkers going again. National Review’s Andrew McCarthy, whom I (otherwise) hold in considerable esteem, spent 1,000 words trying to tart up the ban in constitutional and statutory livery, stressing — hilariously — that he is dealing with the Trump proposal “in its final form.” As if Trump’s barstool eruptions are painstakingly vetted, and as if anything Trump says about anything is ever final.


Take his Syria policy. In September, he said we should wash our hands and just let Russia fight the Islamic State. Having, I assume, been subsequently informed that Vladimir Putin’s principal interest — and target — is not the Islamic State but the anti-Assad rebels, Trump now promises to “bomb the s---” out of the Islamic State.
I’m sure there’s a Trump apologist out there working to explain the brilliant complementarity of these two contradictory strategies. Just as a few months ago there was a frenzy of learned scholarship about the constitutional history of the 14th Amendment following another Trump eruption — the abolition of birthright citizenship.
Whatever the final outcome, Trump’s campaign has already succeeded, indelibly affecting both this race and the Republican future. At a time of economic malaise at home and strategic collapse abroad, Trump has managed to steer the entire GOP campaign into absurdities, like mass deportation of 11 million illegal immigrants, and impossibilities, like the exclusion of Muslims from our shores.
“No Muslims allowed” is the perfect example. President Obama’s Oval Office address on Sunday night marked a new low in his presidency. The shopworn arguments, the detached tone, the willful denial that there might be anything wrong with his policy were deeply unsettling for left, right and center. Even the New York Times had to admit “Obama’s Plans to Stop ISIS Leave Many Democrats Wanting More,” which is Timesese for Democrats Stunned by Vacancy in the Oval Office. Here was an opportunity for the Republican field to launch an all-out takedown of the Obama (and Hillary Clinton) foreign policy.
Within less than a day, that opportunity was wiped out. Once again, it’s the Donald Show.