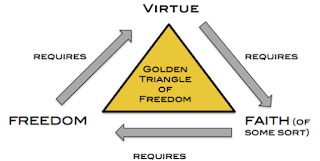 Our concept of freedom is far different from what our founders envisioned. Freedom requires virtue (including responsibility and self-discipline), and one finds little virtue without some kind of faith. I recall a man lighting up a cigarette on a Seattle bus. When I objected (after all, it was strictly prohibited), he loudly protested that "this is a free country." The bus driver made it clear to him that he was free to smoke, but there were two conditions: either he put the cigarette out or he smoked to his heart's content - on the outside of the bus.

Here is more of Os Guinness' excellent insights in The Case for Civility:

Unquestionably, the American founders separated church and state, and equally unquestionably, the result was entirely positive. Curiously, however, there is a deep suspicion of the notion in some conservative circles today, a suspicion that goes far beyond a rejection of the extreme form of separation known as “separationism” or “strict separation.” The latter, as we will see later, has serious flaws. It is not what the framers intended, and became influential only after World War II.

But in reacting to separationism, many conservatives have gone overboard and are actually speaking against the separation of church and state. One example is the common argument heard from the Religious Right that the separation of church and state is a “myth,” that it was “not in the Constitution,” and that it was an invention of Jefferson’s through his reference to a “wall of separation” in his letter to the Danbury Baptists in 1802.

A Republican congresswoman recently denounced the separation of church and state as a “lie.” This argument is both wrong and foolish. The phrase is not in the Constitution, but the principle most certainly is. More important, both the framers and almost all Americans—certainly all Protestants—viewed the provision as principled and positive. Tocqueville went so far as to say that, as a Roman Catholic, he had met many priests and fellow Catholics who “assigned primary credit for the peaceful ascendancy of religion in their country to the separation of church and state.” Indeed, he added, he did not meet a single American in all his stay who thought otherwise. Christian conservatives who are hesitant about the notion today should remember that the “separation” was originally a distinction rather than a divorce.

Separation was not simply negative, a reaction to the evils and excesses of Constantine’s hijacking of the mantle of the church. It was positive, a flower whose seed goes back to early American Baptists such as Roger Williams, who was the first to speak of “a wall of separation,” and far earlier still to the teaching of Jesus about the different duties owed to “God” and to “Caesar,” and then to a key succession of events and statements: the separation between emperor and pope when the emperor moved to Constantinople, the Fourth Treatise of Pope Gelasius in the fifth century (God “has separated the two offices for the time that followed, so that neither shall become proud”), and later the clash between Pope Gregory VII and the Holy Roman Emperor Henry IV in the eleventh century.

In short, long before Jefferson and Madison spoke and wrote, the separation of church and state and its corollary of modern institutional pluralism had their beginnings in ideas that are basic to the Jewish and Christian faiths, though so far yet to be embraced by the other monotheistic faith, Islam.
Another example of a flawed understanding of the separation of church and state is George W. Bush’s much-trumpeted but bungled policy of providing government money for what he calls “faith-based initiatives.”

Predictably, this initiative was surrounded by controversy from the start and did not live up to its supporters’ hopes. At its best, it was a well-intentioned compliment to the dynamism of faith-based entrepreneurialism in the nineteenth century.

The tribute was sincere and the intention laudable—to encourage the voluntarism and dynamic energy that are now recognized as the lifeblood of a healthy civil society, and to foster the little platoons and mediating institutions that are its cells.

In the words of David Kuo, President George W. Bush’s special assistant for faith-based initiatives, “Between Catholic Charities and Lutheran Social Services alone, for example, more than $1.5 billion went to faith-based groups every year. But their activity had come at a spiritual cost. They were, as organizations, largely secular.”
Early-nineteenth-century entrepreneurialism erupted precisely because faith was released from all governmental dependence; and today’s entrepreneurialism will slowly wither as dependency on the government grows again. In other words, the core problem of the president’s faith-based policy is not legal and constitutional but theological and spiritual. In the words of the nineteenth-century Catholic writer Félicité de Lamennais, “It was not with a cheque drawn on Caesar’s bank that Jesus sent his apostles out into the world.”
True faith-based initiatives owe nothing to the government except its protection of their freedom to operate.
There are many parts of the world that have one or other of these two forces. That is not unusual. President Hu Jintao of China for example, correctly trumpets his notion of a “harmonious society.” But with a Leninist one-party state, harmony without liberty is another word for tyranny.
John Kennedy’s call for “a world safe for diversity” was delivered at American University in 1963 under the shadow of the Soviet nuclear threat. It is even more relevant in the face of today’s challenges of exploding religious pluralism. The president’s phrase is sometimes dismissed with a snort, however, because of its echo of Woodrow Wilson’s call for “a world safe for democracy.” As has frequently been remarked, the call for “a world safe for democracy” led to “a world safe for dictatorship,” and “the war to end all wars” led to “a peace to end all peace.”
This confusion has long bedeviled discussions of official prayer in public schools, and supporters of school prayer have found themselves on the horns of a dilemma of their own choosing. Insisting on official Christian prayer in such pluralistic settings, they either ignore the diversity and pray as if everyone shared their faith—thus scandalizing those who do not; or they respect the diversity and pray in an inoffensive way that tries to appeal to as many faiths as possible—thus secularizing their own faith while still offending those who reject public prayer of any kind. The infamous New York Regents’ Prayer, it should be remembered, was written by lawyers, not people of faith at all.
The separation of church and state meant a clear distinction between the two, but by no means did it mean a divorce.
Behind this broad tolerance lay the founders’ general agreement on what I call the “golden triangle of freedom” (freedom requires virtue; virtue requires faith of some sort; faith requires freedom; and so on) and therefore on the fundamental importance of religious liberty to public life.
Posted by Dave Harris at 8:25 PM