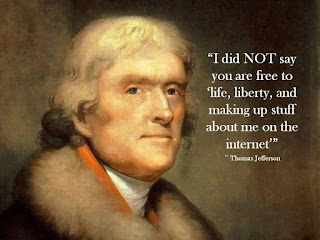 Thomas Jefferson became the hero of both the Christian and the skeptic. He deleted miracles out of scripture, but he attended the largest church - worship services in Congress. Bored with the music, he livened up the hymns by bringing the Marine Band with him.
“It is no exaggeration to say that, on Sundays, in Washington during Thomas Jefferson’s presidency, the state became the church.”
In The Case for Civility, here's what author Os Guinness finds:


Earlier, Jefferson had been more openly deist and antireligious, but two things had changed by the time he wrote the letter. On the one hand, he had read Joseph Priestley’s A History of the Corruptions of Christianity in the early 1790s. After this he softened his earlier views and saw himself as an adherent of an uncorrupted faith—loosely approximating Unitarianism. On the other hand, as his altered position on faith coincided with his presidency, he shifted to a view of religion and public life that some see as utilitarian and others as hypocritical.

But whatever his motive, and whatever the gap between his private and public views, his public view came closer to that of the other framers and to a view of faith that was vital to freedom. “The Christian religion,” he wrote in 1801, “when brought to the original purity and simplicity of its original institutor, is a religion of all others most friendly to liberty.”

Thus Jefferson advocated a stricter view of separation than many of the other founders, but his “wall of separation” bears no resemblance to that of his contemporary supporters whose views lack the subtlety of the sage of Charlottesville. For some of the framers, such a view was unquestionably utilitarian, and even a bit cynical.

But it was not necessarily hypocritical. And it was this functional appreciation of faith that lay behind several incidents for which Jefferson and the other framers have been charged with hypocrisy—for instance, the story Ethan Allen told of a friend meeting President Jefferson on his way to church one Sunday “with his large red prayer book under his arm” and exchanging greetings.

“Which way are you walking, Mr. Jefferson?” the friend asked. “To church, Sir,” the president replied. “You going to church, Mr. J.? You do not believe a word in it.” “Sir,” said Mr. Jefferson, “no nation has ever yet existed or been governed without religion. Nor can be. The Christian religion is the best religion that has ever been given to man, and I as chief Magistrate of this nation am bound to give it the sanction of my example. Good morning, Sir.”

Jefferson’s example is instructive. In two important areas, there was a striking gap between his private and public views—over slavery and over religion in public life. In the case of slavery, it is hard not to conclude that the writer of the Declaration of the Independence was hypocritical. He owned more than three hundred slaves in his lifetime, he had more when he died than when he wrote the Declaration, and he imported slaves into France, although he knew that slavery was illegal there and not customary as it was in Virginia.

But beyond his vested interest in his own slaves, there was always his anguish over the unavoidable dilemma he saw: the slaves’ freedom would endanger America’s freedom. In his own words, he was caught between “justice in one scale, and self-preservation in the other.”

Yet as the conversation with Ethan Allen shows, whether Jefferson was two-faced or simply utilitarian, there is no question that he also believed that freedom requires virtue, and virtue faith, and that he as “chief Magistrate” must support certain public expressions of faith. The fact is that the largest regular meetings for worship in America during Jefferson’s presidency were under the roof of the U.S. Capitol, and with Jefferson present and supplying the music through the Marine Band.

In other words, Jefferson declared his position on the “wall of separation,” but he also demonstrated what he intended, and his deeds are as important as his words. In a day before politicians and pundits talked constantly of “sending signals,” Jefferson’s signals were clear.

On New Year’s Day, Friday, January 1, 1802, he wrote to the Danbury Baptists about the “wall of separation,” and in line with that, he refused to have “fastings and thanksgivings as my predecessors did.”11 But only two days later, the very same weekend, on Sunday, January 3, he as the chief executive went to a worship service in the “Hall” of the House of Representatives, and did so regularly for the next seven years.

One contemporary said that the president “constantly attended public worship in the Hall,” usually arriving on horseback and once braving heavy rain to get there in time.12 Beyond any doubt, church services in the Capitol in Jefferson’s day were as common and uncontroversial as they were popular. A veritable potpourri of preachers and churches passed through when Jefferson was present, many of them unabashedly evangelical and even evangelistic; and money for religious purposes was raised openly and often in the Capitol, with the president himself donating.

“It is no exaggeration to say that, on Sundays, in Washington during Thomas Jefferson’s presidency, the state became the church.”
Neither he nor the government would ever be a party to any imposed and uniform belief or exercise. Let there be no doubt about that. But Jefferson was fully supportive, as being in the public interest, of “voluntary, non-discriminatory religious activity, including church services, by putting at its disposal public property, public facilities, and public personnel, including the president himself.”
Posted by Dave Harris at 5:26 AM